Books Written by the Jazz Philosopher

Click Here to See Books Written by the Jazz Philosopher 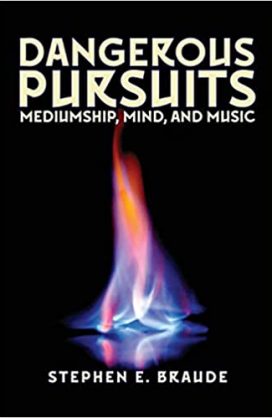 “Stephen Braude’s books are known for their original and penetrating insights; Dangerous Pursuits is no exception. Ranging from mediumship and parapsychology to multiple personality and jazz, Braude is an equal opportunity challenger, taking on unconventional thinkers as well as conventional paradigms. Although his topics are weighty, his clarity of expression and his wry sense of humor make every chapter a delight to read and to contemplate.”
— Stanley Krippner, Ph.D., co-editor Varieties of Anomalous Experience

“Stephen Braude has excellent factual knowledge of the psychic, the mind, mediumship and related areas, and then shares his clear and deeper thinking about what they might be, how they work, and what are dead ends in our thinking that we can avoid. He’s not afraid to wrestle with complexities others skim over…like mediums who cheat sometimes, or just what is this “person” that we think might survive death. You can read a lot of Dangerous Pursuits for the pleasure of satisfying your curiosity, but you’re also going to be thinking a lot more deeply as you read along. Excellent!”
— Charles T. Tart, Ph.D., author of Altered States of Consciousness and Transpersonal Psychologies 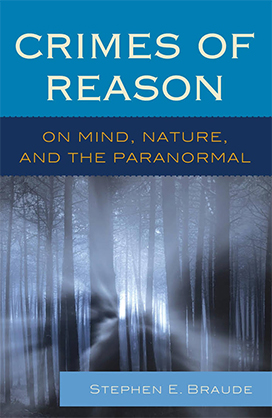 Crimes of Reason on Mind, Nature, and The Paranormal

“Stephen Braude is a professional philosopher and well-established author both of books and articles who is particularly noted for two things.

One is for his work in certain Borderland areas in which topics within philosophy, psychology, parapsychology and psychiatry meet, overlap and interact (or should interact). The other is for the clarity and pithiness of expression with which he handles abstruse and difficult issues.

He has a gift for analogies, often amusing ones, which cut through layers of nonsense (often pretentious nonsense loaded with jargon) and expose the nub of a question. If Braude’s views are correct – and they are certainly cogently argued – these topics are potentially of considerable and wide-ranging importance.” 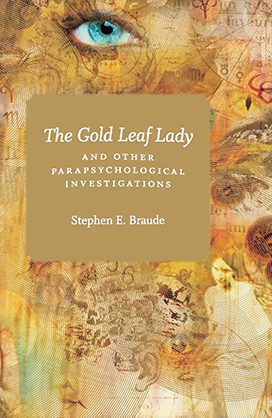 The Gold Leaf Lady and Other Parapsychological Investigations

University of Chicago Press, 2007
Acquire this book (cloth only) from: Amazon.com

“This book isn’t just good, it’s excellent. Stephen Braude is at the top of the intellectual food chain in the study of paranormal phenomena…”

—Fred Frohock, author of Lives of the Psychics: The Shared Worlds of Science and Mysticism

“The Gold Leaf Lady is a read not to be missed. To initiates it offers valuable updates and insights. To those inconversant with the current state of parapsychological research, it may rank as the best introduction available.” 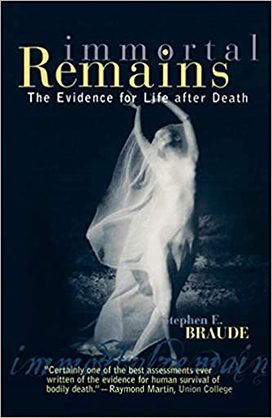 Immortal Remains: The Evidence for Life After Death

“Certainly one of the best assessments ever written of the evidence for human survival of bodily death.”

“This is quite likely the most informed book you’ll ever read on the subject from the perspective of a highly intelligent philosopher, not a New Age guru, and it makes connections to creativity you might not have otherwise suspected.”

– Carole Brooks Platt, Ph.D, author of In Their Right Minds: The Lives and Shared Practices of Poetic Geniuses (2015)

“Imaginative, detailed and well written, and should  certainly be on the reading list of anyone who is in the process of making up his or her own mind.”

“This book is impressive…Superlatives are in order. This is the best book on survival that  I have read, certainly superior to…recent books…which claim that the evidence for personal survival is conclusive, much stronger than it is.” 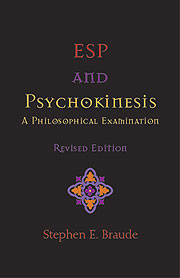 “Braude…has written an important book. It is, moreover, timely, clear, and keenly reasoned. What it attempts is astonishing, what it achieves is substantial.”–James M.O. Wheatley, University of Toronto

” I believe that the publication of this book marks a major event in the area of the philosophy of parapsychology and perhaps even in parapsychology itself. That someone of the caliber of Braude writes a full-length manuscript concerning many of the most interesting and pressing problems in parapsychology is important. His analysis and arguments are always incisive; they are detailed; they are well thought out and well argued. Quite frankly, not only was I enthralled by the book, but I learned a tremendous amount from it and I know of no higher praise than this. The book is a first-rate work which ought to be in everyone’s library.”–Hoyt L. Edge, Rollins College

“This book…will…set the pace for discussion in this area for a long time to come and it can almost be guaranteed to provoke, irritate but, in the end, stimulate all who take the trouble to read it.”–Journal of the Society for Psychical Research

“…a very thought-provoking experience. I highly recommend Stephen Braude’s book to those concerned with philosophical and theoretical issues iin parapsychology.”–Journal of Parapsychology 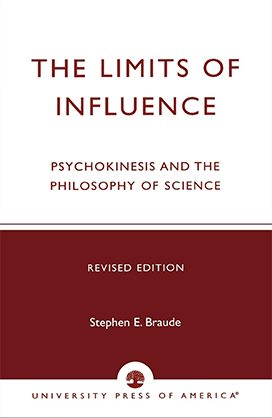 The Limits of Influence

“Braude’s study offers a load of evidence from a fresh quarter showing how difficult it is to get an honest hearing for deviant phenomena and how compliant the model of science actually is. I’m delighted to see it in print. Braude is surely one of the best informed and most readable philosophical guides, and his book offers the most orderly entry into the inevitable quarrels. The anecdotal material is absolutely fascinating. But Braude’s careful speculations about its bearing on causality and empirical confirmation are even more intriguing and much more important.”–Joseph Margolis, Temple University

“An excellent defense of the existence of large-scale psychokinesis. Braude does a very good job at arguing for the relevance of anecdotal evidence in support of large-scale psychokinesis. His chapter on physical mediumship, especially the mediumship of D.D. Home, presents a formidable challenge to the skeptical estimate of PK.”–Prof. Michael Sudduth, San Francisco State University

“A challenging work for both skeptics and believers in psychic effects, Braude…defends what to many would seem an outrageous thesis: that historical reports on mediums and ghosts provide the best evidence for psychokinetic phenomena–rather than laboratory controlled experiments. A sequel to Braude’s earlier work, ESP and Psychokinesis: A Philosophical Examination…this book is the only comparable work of sophisticated philosophical analysis. Fine scholarship on the reports of mediums and apparitions is combined with careful philosophical reasoning…The careful argumentation should especially provoke philosophers and parapsychologists.”–Choice

“Stephen Braude is among the most philosophically sophisticated of those currently writing on the ‘paranormal’. He is perhaps the most philosophically sophisticated among clear advocates of the paranormal. What he attempts is clear and compelling argument for extremely unpopular views, and that alone makes this book–like Braude’s work in general–well worth attending to. Braude’s forceful arguments…and his careful theoretical suggestions…make the book of genuine philosophical interest”–Patrick Grim, SUNY Stony Brook

“…a deep and serious book which in spite of its erudition makes very interesting reading…should not be missed by anyone interested in psi phenomena and psychokinesis.”–New Humanity

“Braude’s originality, cogency, and challenging conclusions–and his detailed chronicle of psychic virtuosity–make for a work that both philosophers and parapsychologists should study.”–James M.O. Wheatley, University of Toronto 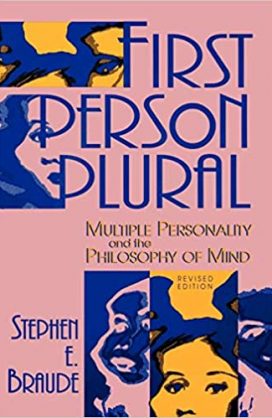 First Person Plural: Multiple Personality and the Philosophy of Mind